A long time ago in a development called Hollywoodland in the Hollywood Hills, the Crescent Sign Company was commissioned to build a sign to advertise a “superb environment without excessive cost on the Hollywood side of the hills.” Little did they know that the grandiose ideas of the real estate developers Woodruff and Shoults would become an advertising icon of stellar proportions, eventually becoming one of the most well-known landmarks of all time. And so it goes, the Hollywoodland sign was born of wood and sheet metal, as a temporary advertisement for the neighborhood bearing the same moniker. That was 1923 and it was indeed a sign of the times.

According to the Hollywood Sign Trust fast facts it was built at a cost of $21,000 by LA Times publisher Harry Chandler. The developers intended for the sign to stay in place only until the tracts of land comprising the development were sold (about a year) after which time it would most likely be dismantled and discarded as scrap. As luck would have it, the sign endured far beyond even the wildest of expectations.

With the early 40’s came world war and Hollywood’s contribution to the war effort: industrialization for the production of war goods, social and moral support of troops’ families, and the ever-present production of entertainment for overseas forces. By the mid-40’s the Hollywoodland development had fallen victim to the post-war depression. The sign, unmaintained and in disrepair, became the property of the city in 1944 and evolved from billboard to local landmark.

In 1949, after years of continued neglect, the Hollywood Chamber of Commerce made a commitment to
preserve the sign. The letters L-A-N-D were removed to better reflect the district rather than just the housing development, and the remaining letters were repaired as a revitalization effort. The original sign played a role in numerous interesting events over the years, but eventually it became so run down and dilapidated that it was replaced with the current Hollywood sign in 1978. Now, the Hollywood sign is known throughout the world as both a landmark and an iconic symbol of the entertainment industry.

Fast forward to present-day and to the reason we’re focusing on this American icon. When the original sign was dismantled, its component sheet metal ended up in a warehouse until it was purchased at auction in 2007 by renowned relief artist Bill Mack, who envisioned the metal facing panels as a canvas for his artwork. Through this medium, he would pay tribute to some of Hollywood’s greatest actors and actresses -Marilyn Monroe, Paul Newman, and John Wayne. Bill’s grandest vision for that historic pallet of tin evolved — what if the essence of the original Hollywood sign could live again, in the form of a life-size rendition of the original H? Imagine that it could debut at his studio in Edina, Minnesota as an artistic salute to Hollywood and the birthplace of an industry. Imagine the symbolic connection between the original metal and the immortal images painted upon them!

Through a remarkable series of referrals, Bill’s representing agency, Erin Taylor Editions, came to us with the concept: they needed someone to engineer a structural framework for the original Hollywood sign panels. The structure had to be full-scale, 45 ft tall x 33.5 ft wide. The structure also had to be portable because Bill wanted to tour it around the country, promoting his art while paying tribute to the icon. No problem. Temporary structures are almost second nature to us, but that wasn’t quite enough for the client. Ever the visionary, Bill hoped that eventually someone would want to own that piece of history, for permanent display. Therefore, the structure had to be engineered as a permanent installation, with full permanent structure design loads. Where, we asked, would this structure finally come to rest? That’s the catch: no one knows yet. Potential tour stops include Chicago, Miami, New York – anyplace with a strong arts community – but in Bill’s wildest dream the structure would follow a path right back to its origins in California.

Okay, full-scale structure, tourable components, permanent installation design loads, high winds and seismic forces. Now we’re talking! Could we do it? Of course we could! After summarizing the design goals we were asked to provide a design brief describing our own visions to meet those goals, through a gamut of technical, logistical and aesthetic perspectives. Nick Neary, Erin Taylor Editions project manager says, “Even though we needed to get through the design presentations as a formality, it almost wasn’t necessary. [Schaefer] was one of a few firms we interviewed about the project, and within about 10 minutes of conversation with [Schaefer], I knew they understood hidden nuances of what we wanted to achieve right from the start. Clearly, they had the experience and expertise with unique structures, so I knew they were the right choice for us.” 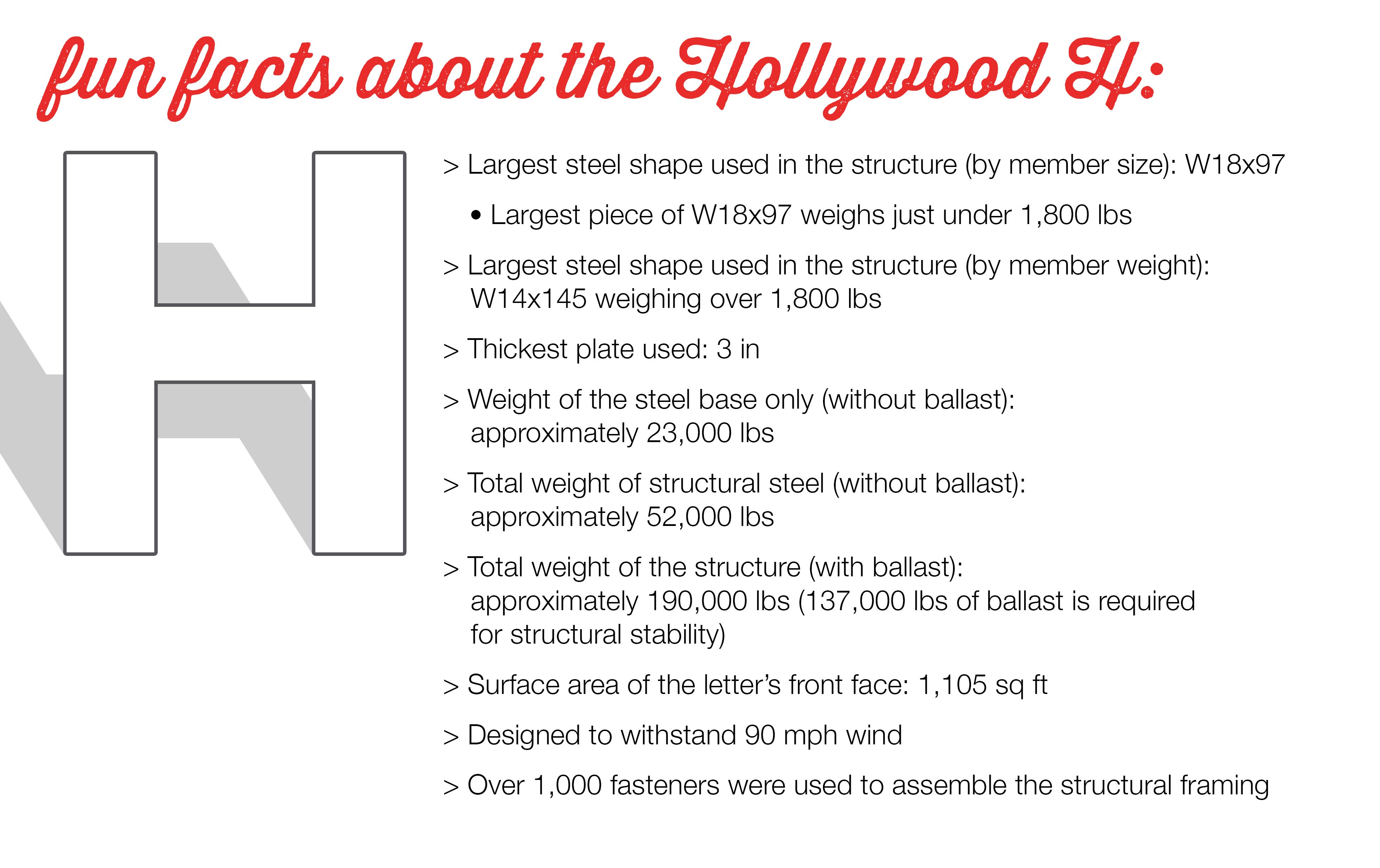 There were several challenges encountered in the design process. Understanding the size and scale of the structure is important to also understanding what type of framing system might be used to accommodate the sheet metal face. Generically, the face panels would be attached to main face-panel frames, connected together to form a surface area representing the letter H. Each face panel would be somewhere around 11 ft tall by 5 ft wide, but care had to be taken to so that the individual frame sizes could be safely packed into a box truck for protection of the structure’s main asset (sheet metal). Those face panel frames would need primary support girts to connect the frames to primary structural columns, along each leg and across the horizontal center panel. The columns themselves would need to be strong enough to support what amounts to a 45 ft tall sail under load, without twisting or buckling in the process, and the structure would also require a base frame of sufficient size and mass that it could continuously and repeatedly withstand the gravity loads imparted to the 3 in thick steel column base plates, without overturning.

From a materials perspective, only two choices were practical: aluminum or steel, each with their own unique set of material characteristics. Aluminum is lighter in weight, so the smaller components would be easier to manage onsite, but it requires more analysis time in design checks. Eventually the modular face panel support frames became a tipping point in defining a solution. Each aluminum weld results in an allowable stress reduction in the frame connections due to the heat affected zone. In contrast, steel does not weaken when welded, so we chose a commonly available steel HSS2x2 shape for the frames.

The main structural support system presented a larger challenge. The system needed to be strong enough to withstand all of the design loads, but the component shapes needed to be readily available. Aluminum truss is a common choice for touring systems, mainly because of the reduced weight and modularity, both of which potentially translate directly into reduced transportation costs. However, as the conceptual elements of the structure began to evolve, it became clear that truss would be cost prohibitive with a longer fabrication lead time, so steel became the obvious choice. Using steel framing elements enabled a more efficient structural design requiring only minimal modification in consideration of the touring logistics, but it also served to enhance authenticity, an important goal expressed by the artist. Nick said, “The point where we decided to move away from a ‘standard’ touring structure using the box truss and going with one that gave the sign a support closer to the original design [was pivotal in the process]. Bill was always adamant about what the H would look like from all angles and while the box truss made sense, I don’t think the final product would have been as cool if we went that direction.”

The steel base frame assembly was a significant challenge for the project because all components had to connect together to form a monolithic steel base frame, into which all of the ballast had to fit in order to provide the necessary overturning resistance and stability. We went through several iterations of framing designs that could be split apart into component sections for transport, but could also assemble together into a rigid frame. This process included a critical min-max design optimization for the overall base frame size, relative to the amount of ballast required. No frame subassembly could be larger than 102 in in one direction, or wideload transportation permits would be required. The bottom of the letter would be 5 ft above the ground, so that became a dimensional constraint for ballast stacking height. Since Jersey barrier style concrete ballast is almost always available in any major city, it’s a logical choice. However, with space constraints we had to be more thoughtful because the irregular Jersey barrier shape doesn’t stack or nest very efficiently when you need 137,000 lbs of ballast mass confined within a latticework of steel beams and plates. The client considered water ballast, but that would have required an entire additional trailer just to transport the empty tanks from place to place.

Eventually we suggested bin blocks to solve the problem because they stack very neatly and are almost as available as Jersey barriers or K-Rail. In retrospect, this was a significant solution for our client. Nick said, “One of the biggest breakthroughs we had on the project, as far as Bill is concerned, was deciding to use the concrete bin blocks as the ballast weight. The first group of engineers we spoke with wanted to use water barriers that would’ve needed a full trailer of their own to haul around just because of their size and would need thousands upon thousands of gallons of water. I think we may have had the idea before we spoke with you guys, but we came up with it on our own and your team suggested the bin blocks. Without the idea of getting those blocks on the road I don’t think Bill would’ve ever gotten comfortable with the idea of the tour.”

The final design is comprised of W18 columns with HSS10x3 girt framing for support of the face panel frames, all supported on a steel base frame. Autodesk Inventor was utilized for the structural framing model visualization and component fit-up verification. Dan Wissman, one of our structural engineers, crunched the analytical model using RAM Elements. As our structural design and detailing developed, the main structure sprang to life, from visualization to reality. As a result, and true to its history, the metal from the H stands once again as an advertising icon, the original sign’s face metal carefully restored, supported on a structure designed by Schaefer – to whom Bill Mack affectionately refers as the Rock and Roll Engineers. On August 9, 2012 the structure was revealed at a private unveiling in Edina, Minnesota… well, as private as a 50 ft tall H can be, tucked alongside of Interstate 494!

RELATED POSTS
How Ballast Works
To Steel or Not to Steel?
And the Crowd Goes Wild: Keeping Bleachers Safe for the Fans